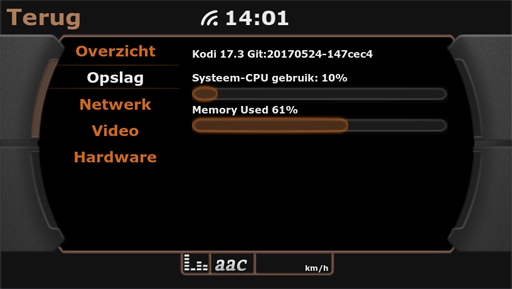 Since by May 2017 Kodi 17 is offered as default on the standard Raspbian Distro. As of this moment I started editing / programming on the Audi Rns Skin.
Eventually I managed to get the skin compatible with Krypton! From now on I will process additions in this version.

The new skin can be downloaded at header "RELEASE DETAILS" (Existing users).
If you are not an existing user yet,you can click here to purchase the skin.

In 2013 I bought my Rns-e Audi navigation system.
Shortly after I got an AV interface and a RVC (Rear View Cam) installed. Because by co-incidence this interface still had a possibility to receive another Video signal, In early 2014 I connected my Raspberry on to it for the first time.

It soon became apparent that I had the ambition to have these functionalities of the Raspberry, the Rns-e and later also the FIS on the Dashboard screen as much as possible to integrate to each other.

The purpose of this website is that I (in response to questions from bidding on such short term this website go fill that the complete description of my ' project ' after to read and, if necessary, to reproduce.