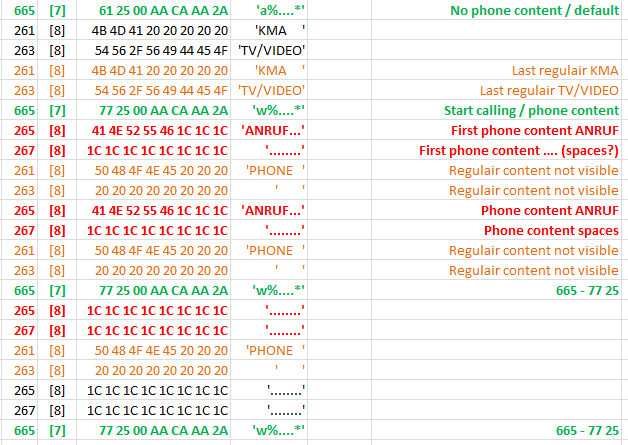 The 665 messages also show a sequentiality of which we might get starting to make assumptions with 🙂
I’ll mail the full log to you, but the 665 seem to to have the following meaning;

With al this info I think I’ll need to add an (ugly) override to the default 665#61 FSE sends regulairly every second.

Summarized; the FSE says every second “I’m not doing anything, any FIS line 1 and 2 (265/267) won’t set visible, but the regulair 261/263 TV/VIDEO or PHONE content will be visible. The raspberry at the same time says every second “Ok, Phone active, let me send content to 265/267. This “argue” explains the flickering.

If this ugly workaround does not turn out to be effective there might be a way to reject FSE acceptance in the device “Ring” (There is a follow up order between IDs 428 – 436 – 43A) It could be possible to break this ring, make FSE stop sending anything. Question is if it’s possible to “reconnect” FSE and have KI to accept FSE again…. Hopefully the first workaround does the trick!!

I hope to be able to upload a new version of the plugin with this function built in before end of this week.
You’ll be able to download it from the homepage (and send you an update about it ofcourse.)